A short drive to Hoedspruit started the day off, arriving at Blue Cottages, a place of typically African character. The afternoon saw us visiting Moholoholo; a rehabilitation centre for orphaned or injured animals, our guide was to be Moses, a colourful and enthusiastic leader. The visit took around 2 hours and was full of interesting tales and facts about the residents at Moholoholo. We were shown and told about a diverse range of creatures including Cheetah, Wild Dog, Hyena, Honey Badgers, Black Rhino and a variety of Birds of Prey. Highlights were the opportunity to get hands-on with Cheetah and Bateleur Eagles. All the animals are kept in compounds so photography was through the fences, however some good shots were still possible. It is always sad to see animals behind bars but this was the better option for these inmates as they could not be released back into the wild due to their unfortunate histories, some had been injured others habituated to people. The day ended with photo opportunities with Marabou Storks and a pair of White Rhinos who were wandering around the car-park and in the camp next door. Overall a very recommendable day out for 100ZAR each (£10).

Excerpt from the Moholoholo website.
Nestled in a picturesque setting at the base of the Drakensberg escarpment in the Limpopo Province Lowveld of South Africa, Moholoholo has become a haven for the rehabilitation and care of abandoned, injured and poisoned wildlife. Wildlife is brought to the center from all corners of South Africa, and once healthy enough are re-introduced into their natural environments. Those creatures who cannot be returned to the wild due to the nature and extent of their injuries, are cared for at the center and are used to educate the many people who visit us each year, both from across South Africa and abroad. Another important function of the center is breeding. We have successfully bred and released into the wild the endangered Crowned Eagle, Serval and many others. This centre is a non-profit organization, relying completely on the support of the public. Moholoholo Rehabilitation Centre was started in 1992 on a Game Farm owned by a wildlife enthusiast Mr. J.A. Strijdom. Brian Jones the manager had a Crowned Eagle when he arrived and then was brought in a day old Zebra, from there word got out that Brian was able to care and release animals
and birds…and so the Rehab Centre started. At first donations where welcomed but as the Rehab grew he realized that money was needed for the medicines and up keep of the cages and plus the expense of feeding so he then decided to ask a fee which started at R5 an adult. The tours lasted from an Hour to two, sometimes three depending on the interest of the public. The rehab now houses confiscated Lions from a Mozambique Circus, Leopard, Caracal, Serval, Cheetah, Crowned Eagle, Marshall Eagle, Vultures and many more that have been confiscated, orphaned, abandoned or injured. The costs have been high and at times desperate but the rehab seems to just survive with the donations and money paid by the public to do a tour. His aim is to get to the public the awareness of the plight of the Environment in Southern Africa. 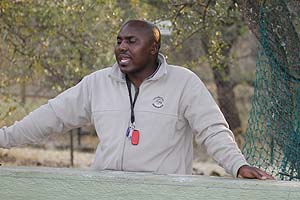 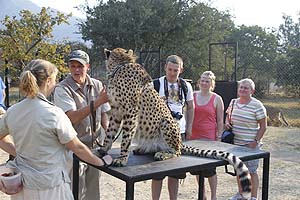 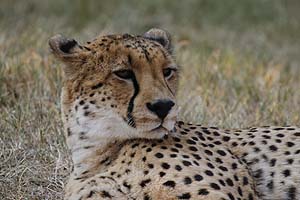