We just spent the weekend in the historic city of York and for a change the weather was reasonably kind to us – so out with the camera then. The weather was fairly mixed over the weekend and we had bright sunshine which became overcast and then the downpours, this mix gave a range of lighting, with associated opportunities and issues!
York Minster is undergoing quite a major restoration task and a lot of it was under a cloth of scaffolding and as such wasn’t that photogenic so I needed to find other subjects and there are many of them. Firstly I tried picking out some of the details and doorways around the Minster and spotted the doorway to St Williams College in College Street. Initially this was in full sun and had fairly harsh shadows so I returned when more overcast for a better shot. The street itself had some interesting features and I captured the 1891 date and artwork on an adjoining building.
On to the Minster and I scouted around picking out the gargoyles and grotesques that adorn this huge monumental building. Due its size many of these items are very high and not easy to shoot so time was spent looking in less obvious places and many were found and shot. Emperor Constantine always looks imperious at the front of the cathedral and I wanted some slightly different shots other than the straight record photos. I had to leave soon-ish as I was becoming the resident photographer for all the overseas tourists that wanted a shot of themselves posing with the emperor!
A walk around the walls gave us some views into the city centre, but eventually we had to escape the rain in the pub. Afterwards Clifford’s Tower looked good bathed in sunlight against a dark rain soaked sky.
I must say that the detail that the EOS6D can capture with its full frame sensor is outstanding coupled with the 24-70L lens. 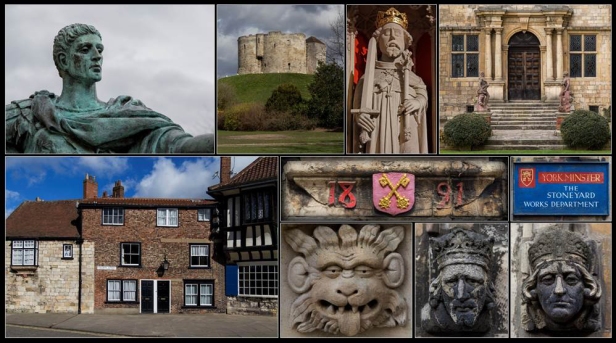