The Montañas del Fuego (Fire Mountains) were dramatically created between 1730 and 1736 when more than 100 volcanoes, covering more than 50 km², rose up and devastated this part of the Lanzarote landscape. The last eruptions were way back in 1824, however due to the low rainfall (and therefore lack of erosion) the area appears much the same as it did just after the eruptions. In 1968 the area was declared a national park, Parque Nacional de Timanfaya. Unfortunately it is not possible to just wander freely around the Volcanoes, however, a Coach Trip around the National Park (La Ruta de los Volcanos) is included in the entry fee to the park. There are plenty of photo opportunities available on the drive in to the park and at the car park but it’s a shame you cannot get out in the landscape on foot making it difficult to create that unique shot.
At the small and remote village of El Golfo you can walk up a small hill to see the beach and the well-known Green Lake. The walk is a little steep but well worth it for the views of the village, the lake and the unusual landscape. The lake lies between a pebbly black beach, and a backdrop of the black cliffs that really is spectacular.
Villa de Teguise (village of Teguise) was once the ancient capital of the island with over 500 years of history, which the town has proudly preserved, Teguise was declared an architecturally historic artistic site) in the 1980´s. Today it serves as an escape from the bustle of the city and a reminder of the glory of yesterday. Among the religious buildings are Ntra. Sra. de Guadalupe church which stands proudly in the centre of town.
Shown below are a number of shots from Timanfaya, Teguise and the surrounding landscape. 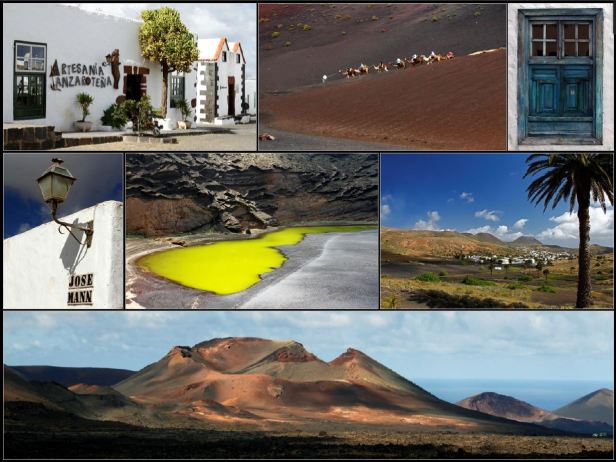