Recently I spent four days in the Dumfries area of Scotland photographing a range of wild birds from some purpose built hides owned by Alan McFadyen.  Alan has been going viral recently on the internet since appearing on Autumnwatch with his ‘best bird in the world’ accolade from Chris Packham.
The first day was spent at his Kingfisher hide situated beside a tidal river near Kirkcudbright. The intention was to spend most of the time attempting to capture Kingfishers as they dive into the pool for the fish and then to catch them emerging with their meal. This proved a very difficult task as you need fast shutter speed to freeze the action and also to get the bird in sharp focus, this generally means high ISO settings on the camera. I started off with a 200mm lens on a Canon 7D2 before coming back to a 100mm f2.8 lens for more speed and depth of field. An additional skill is to be able to predict when the bird will hit the water, typically shots at 10fps will have the bird’s bill entering the top of the frame 1 and frame 2 will show just a splash of water with the bird nowhere to be seen. Many attempts later I got some useable shots but not really any outstanding ones, I need to go back and try again, maybe in summer when there’s a bit more light about.
Secondly there was an opportunity later in the day to capture some ‘perched’ shots with the Kingfisher firstly stunning then swallowing the minnows. These shots were much easier to capture, using 400mm on a full-frame camera, and I got some really nice frame filling ‘bird on a stick’ photos in some beautiful late afternoon light. I did even get a shot of one bird with two fish in its bill. 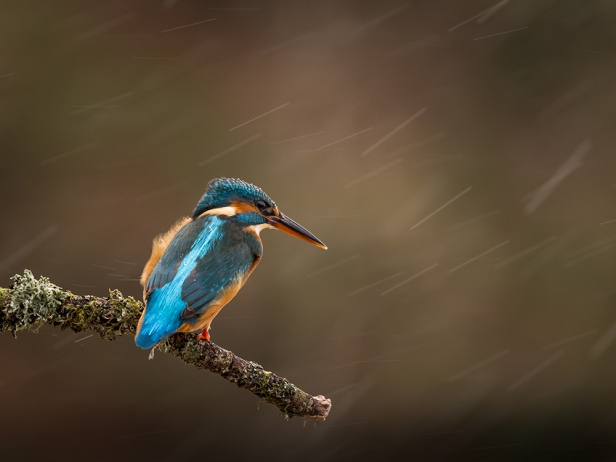